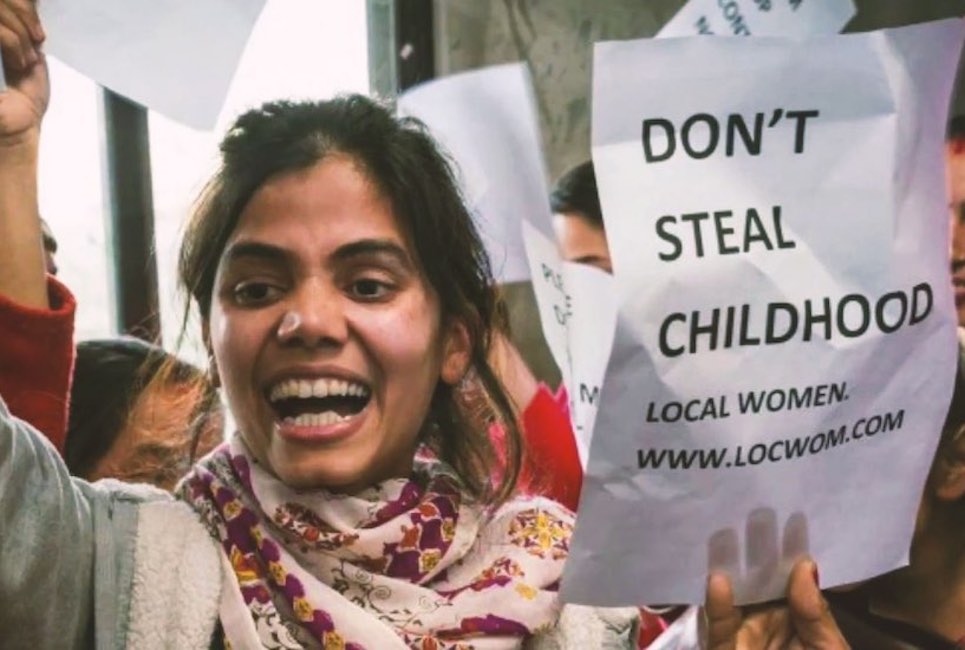 Nasreen Sheikh was born silent. With no documents to acknowledge her birth or death, and with poverty stuck in her throat like smoke, she was the perfect victim of the sweatshop industry. You can’t report a crime if you don’t exist, and Nasreen learned from an early age that the more she stifled her voice, the safer she would be.

Freedom has a way of scraping through, and for Nasreen, it came in the form of a stranger who offered her a mere $5 but ultimately gave much more. With his mentorship, she escaped the rag trade empire at 11. She set up an empowerment center called Local Women’s Handicrafts across the sweatshop that stole two years of her childhood. Today, she profits from the very skills it had once exploited as a grand “go to hell” flourish.

Today, she’s training and employing sweated labor survivors and travelling through the USA, giving them a voice. She’s freed over a hundred people thus far.

If fashion brands were the only predators in Nasreen’s story, that would be all of her achievements, but she was born in a country that’s divided into 3,000 castes. To achieve her highest social goals, she would have to create entire economies in forgotten places by empowering forgotten faces. Impossible? No. She’s achieving it one piece of silence at a time.

She appeared in the pages of Forbes magazine before she even knew what Forbes was and became the face of a movement before she had the documents to legitimize her existence. She opened her own NGO before she became an adult, and her business model is one of the most sustainable ways out of poverty around the world. Even so, Nasreen never meant to achieve such impossible things. She just wanted to help one woman, then two, then three. 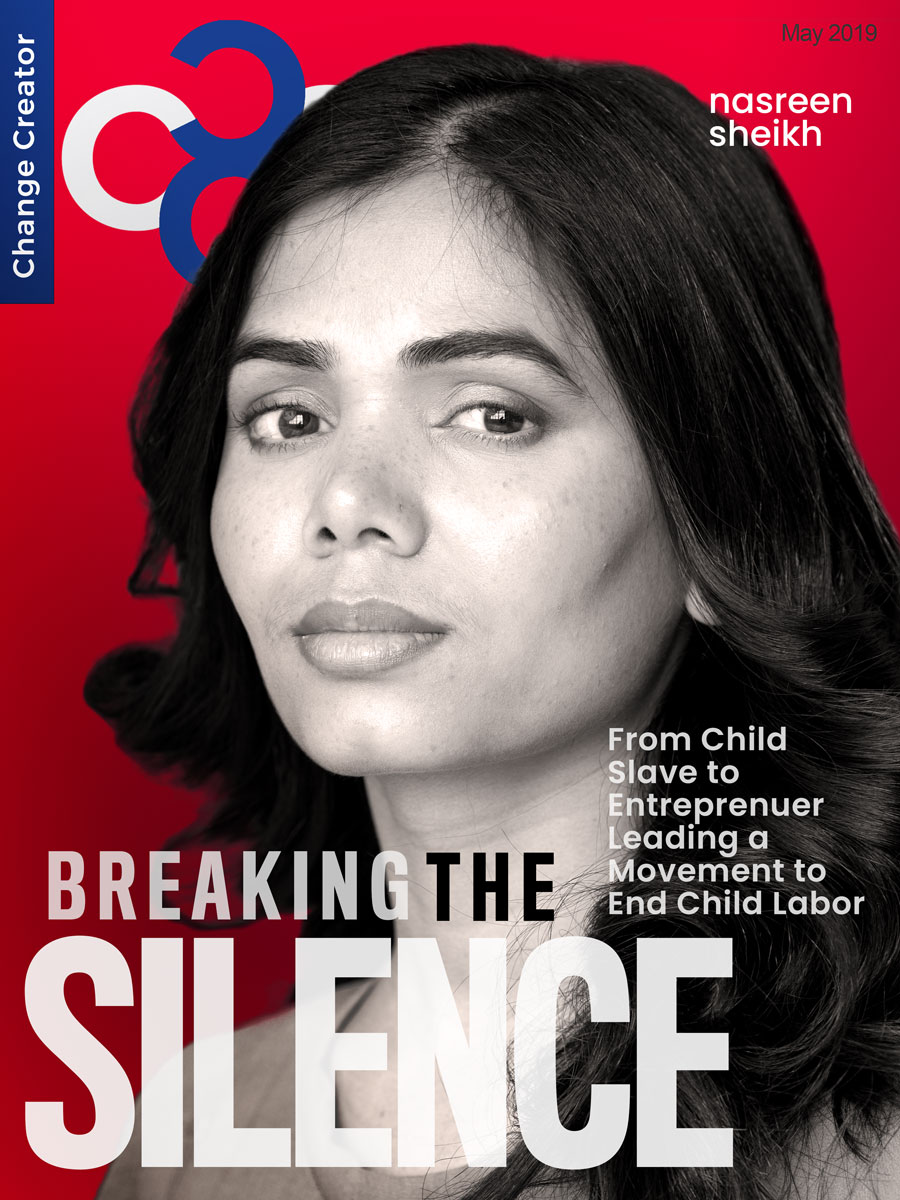 The Arts and Crafts Movement

The issue is a complex one. To unravel it, you must travel to the landlocked republic of Nepal, where 37% of children are trapped in forced marriages before they turn 18. You must walk through the mud of Salia Sahi, where rape isn’t raping if you’re married. You must visit Kathua and Dharavi, which imprison children before they learn to write by never issuing the birth certificates they need to obtain passports and access healthcare.

To undo the injustices that victimized Nasreen Sheikh, you must unpick a figurative garment that’s taken thousands of years to weave. It’s an impossible task, but Nasreen eats “impossible” for lunch. She’s created a five-stage system for undocumented sweatshop survivors because you don’t become the face of a global movement by shying away from the opposition.

Unlike lesser NGOs, Nasreen tailors her assistance to the goals and skills of the women she helps. She gives them a safe place to live, then offers them six four months to four-six years of sponsored training. Then, each survivor can work for Nasreen’s Social Business (Local Women’s Handicraft profit crafts store) or get a loan to start a business. If she remains under the Local Women’s Handicrafts banner, she will train other survivors while earning a living salary. The combined NGO/for-profit model is practical and inherently sustainable. No matter how many women it helps, its ability to support increasing numbers is ingrained in its strategy.

Most NGOs rely on funding to support their growth, and that requires an endless search for new donors. The traditional NGO model has generated hundreds of funding strategies, and none of them begin to address the fact that donations are a finite and time-heavy resource. Nonprofit is a tax status, not a funding strategy, so Local Women’s Handicrafts and the NGO that feeds it are elastic enough to grow indefinitely.

The enterprise receives requests for support every single day, and while it has a waiting list, it’s growth is automatically provided for. Nasreen’s store supports her nonprofit’s growth to encourage further elasticity. She turns the skills she teaches into viable products that can develop further under her brand.

>To breathe life into her NGO, Nasreen had to apply for a loan before she’d turned 14. The loan covered only the barest of bones: a sewing machine and four walls to house it. She built her NGO one brick, one voice, one woman at a time. With that skeleton in place, she gained an education and built a social impact model with incredible scope. She’d never heard the term “iterative development,” and Chang’s Lean Impact strategy had yet to be written, but the approach came naturally to her anyway. With such complex issues to solve, it was the only way forward, but then came to Nepal.

A Flood of Silence

In 2017, Nasreen traveled to the border of India and Nepal after almost 200 of its residents were killed in a flood. The area was undocumented, but most of its men had left to find work in neighboring regions. Women remained behind, unable to escape because they were not allowed to work. Most NGOs were too intimidated to confront this complex society, but Nasreen isn’t most people. Confronting the crisis required her to obtain support from castes who refused to share a room with survivors, let alone donate their resources to them. Her approach required women to confront ingrained patriarchy by daring to become employed. In short, Nasreen had to overcome four core challenges: slavery, India’s patriarchy, the cast system, and the lack of birth certificates.

Craftsmanship has become a key escape from poverty and abuse.

From the dusty streets of Southern Africa to the cluttered slums of Lebanon. Nasreen is only too aware of the gifts it offers. The intimacy and power of her workshop leaked beyond its walls and into the hearts of higher castes and patricentric husbands. The model broke down all four walls it was designed to overcome, so she took it to the flooded Nepalese village. The spouses who’d once been horrified at the idea of their wives working now welcome the support. The higher castes who’d once refused to involve themselves in the under-class have felt the power of Local Women’s Handicrafts and come to support it.

Sheikh attributes the change to the authenticity of her center. “When you put so much love [into something],” she says, “people can feel it because we’re all human. We feel the love. That’s the power of humanity.” It’s not the kind of tactic you’ll find on Wall Street, but when you’re trying to fix humanity, you must work with the stuff of humanity. Even so, today’s consumers are adept at detecting phony branding and greenwashing, so sincerity creates the very bricks and mortar of a successful social impact brand. That’s why Sheikh’s model rose well beyond her expectations. 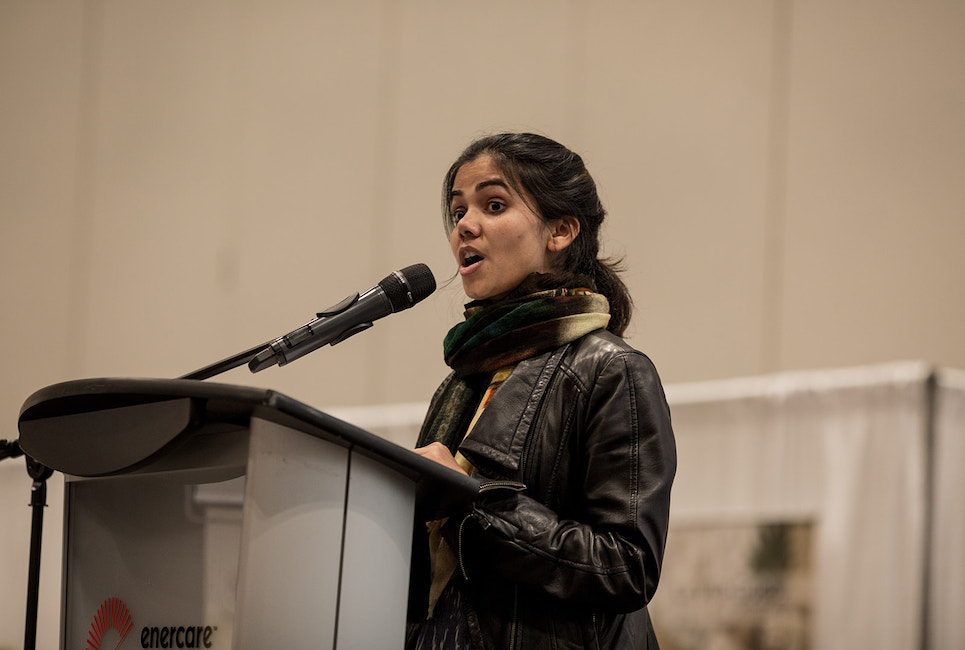 The good leaders train others to be a leader as well.

She still wasn’t satisfied with her numbers. She trained her workers to fulfill her leadership role, freeing herself up to travel the United States to draw attention to her cause. Her TedX audience gave her the kind of ovation Fortune 200 speakers can only hope for. She spoke at the 360° Fair Trade Conference and the Buy Good, Feel Good Expo. She’s been interviewed by Jay Shetty and The Chicago Tribune. Her tour of America has resonated with audiences because she speaks with sincerity. It has also inspired a new goal: to connect western mentors with under-served women in her community to fuel even more growth.

When she’s working in Nepal, she no longer takes care of the nuts and bolts of daily management. Her role is now a visionary one because you can’t manifest a global success story by focusing on rent payments. Sheikh admits that vision requires courage, but she has more than enough of that to spare.

“You need a solid pillar and passion in your heart to do this type of work.”

Sheikh is working to clear the air of a polluted industry by bringing the voices of under-served communities to millions of Westerners. She’s achieving it because she’s only too aware of her resources. Has she educated herself? Certainly, but at her core, she’s a resounding example of the change she’s bringing to the world. Most successful change-makers are.

“Know yourself. Go deeper. Find out who you truly are. When you find yourself, you will automatically be of service to everyone.”

Nasreen Sheikh was once silent. She wove that silence into every garment she produced in the ten by ten cell she ate, worked, and slept in. Today, she weaves a voice into every garment her fair trade employees create. Then she carries thousands of voices onto a global stage. Millions of people are listening.

8 Key Takeaways We Learn from Nasreen

1) Build sustainability into your social impact model so that you’re not reliant on funding. You can achieve this through a pay-it-forward model, a for-profit support structure, or through permanent stakeholders.

3) Visit the communities you serve and learn all you can about the people your cause hopes to support.

4) Use business activities to strengthen the capacity of your NGO. Don’t ignore macro issues like economic development in high-poverty regions.

5) Digital marketing is a core part of any campaign, but don’t ignore traditional approaches to branding. PR isn’t dead.

6) Know yourself. Build your social impact business around your unique concepts instead of copying others’ and being inauthentic with your causes.

7) Treat the people you help as individuals. Dictating their freedom isn’t freedom at all.

8) You can’t save the world until you help one person, so don’t let grand goals intimidate you. Start small.

Previous ArticleSustainable Development Goals Provide a Framework: Here’s How You Can Use ThemNext ArticleWhy Every Social Entrepreneur Needs a Business Model – And How to Get One

Kirsten Holmes
Kirsten Holmes is a Cape Town-based features writer and poet. Her work has appeared in Entrepreneur Magazine, Change Creator, Marie Claire, and other publications. She has also been published in academic journals locally and in the UK.

No, You Probably Don’t Need a 50 Page Business Plan

Why You’re Not Hitting Your Goals, and How to Fix That (5 steps)