We love Dr. Muhammad Yunus around here so much – he really is the Godfather of Social Enterprise. His insights, lessons, and tips are timeless. That’s why we had to share our best Muhammad Yunus quotes with you today!

Get inspired. Get out there and change the world.

While technology is important, it’s what we do with it that truly matters.

We prepare our students for jobs and careers, but we don’t teach them to think as individuals about what kind of world they would create.

Our financial institutions have created a worldwide system of apartheid without anyone being horrified by it. If you don’t have collateral, you are not credit worthy. To the banks, you are not accepted on our side of the world. (From, Creating a World Without Poverty: Social Business and the Future of Capitalism.)

Civilization has given us enormous successes: going to the moon, technology. But then this is the civilisation that took us to debt, environmental crisis, every single crisis. We need a civilization where we say goodbye to these things.

Health care can be made more affordable for the poor without requiring major new scientific developments, just the smart application of current technologies. We have seen a $25 incubator and diagnostic instruments that are built tough, cheap, and reusable for the developing world.

Unprecedented technological capabilities combined with unlimited human creativity have given us tremendous power to take on intractable problems like poverty, unemployment, disease, and environmental degradation. Our challenge is to translate this extraordinary potential into meaningful change.

On Women and Equality

Soon we saw that money going to women brought much more benefit to the family than money going to the men. So we changed our policy and gave a high priority to women. As a result, now 96% of our four million borrowers in Grameen Bank are women.
—

When a destitute mother starts earning an income, her dreams of success invariably center around her children. A woman’s second priority is the household. She wants to buy utensils, build a stronger roof, or find a bed for herself and her family. A man has an entirely different set of priorities. When a destitute father earns extra income, he focuses more attention on himself. Thus money entering a household through a woman brings more benefits to the family as a whole. (From Banker to the Poor: Micro-Lending and the Battle Against World Poverty)

UN studies conducted in more than forty developing countries show that the birth rate falls as women gain equality… I believe income-earning opportunities that empower poor women … will have more impact on curbing population growth that the current system of “encouraging” family planning practices through intimidation tactics. Family planning should be left to the family. (From Banker to the Poor: Micro-Lending and the Battle Against World Poverty.)

In Bangladesh, if a woman, even a rich woman, wants to borrow money from a bank, the manager will ask her, ‘Did you discuss this with your husband?’ And if she answers, ‘Yes,’ the manager will say, ‘Is he supportive of your proposal?’ If the answer is still, ‘Yes,’ he will say, ‘Would you please bring your husband along so that we can discuss it with him?’ But no manager would ever ask a prospective male borrower whether he has discussed the idea of a loan. (From Banker To The Poor: Micro-Lending and the Battle Against World Poverty.)

Once poverty is gone, we’ll need to build museums to display its horrors to future generations. They’ll wonder why poverty continued so long in human society – how a few people could live in luxury while billions dwelt in misery, deprivation, and despair. (From Creating a World Without Poverty: Social Business and the Future of Capitalism) 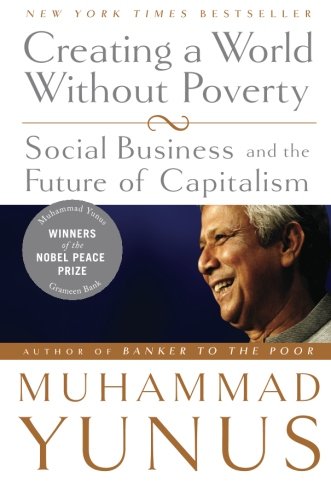 People.. were poor not because they were stupid or lazy. They worked all day long, doing complex physical tasks. They were poor because the financial institution in the country did not help them widen their economic base. (From Banker to the Poor: Micro-Lending and the Battle Against World Poverty.)

I believe that we can create a poverty-free world because poverty is not created by poor people. It has been created and sustained by the economic and social systems that we have designed for ourselves; the institutions and concepts that make up that system; the policies that we pursue.”

Even today we don’t pay serious attention to the issue of poverty, because the powerful remain relatively untouched by it. Most people distance themselves from the issue by saying that if the poor worked harder, they wouldn’t be poor.” (From, Banker to the Poor: Micro-Lending and the Battle Against World Poverty.)

I think, social business is the most logical thing to do. If we had done that, we could reduce all the problems we have.

The current financial crisis makes it very clears that the system that we have isn’t really working, and this is the right time for us to undo things and build them in a new way.

Whenever I see a problem, I immediately go and create a company. That’s what I did all my life.

All people are entrepreneurs, but many don’t have the opportunity to find that out.

All human beings are entrepreneurs. When we were in the caves we were all self-employed . . . finding our food, feeding ourselves. That’s where human history began . . . As civilization came we suppressed it. We became labor because they stamped us, ‘You are labor.’ We forgot that we are entrepreneurs.

I’m encouraging young people to become social business entrepreneurs and contribute to the world, rather than just making money. Making money is no fun. Contributing to and changing the world is a lot more fun.

The challenge I set before anyone who condemns private-sector business is this: If you are a socially conscious person, why don’t you run your business in a way that will help achieve social objectives?

Capitalism has been interpreted as an exclusively profit-centric human engagement. Some have been saying to bring people and planet into the picture. This can be a good change, but it is still not fully operationalized. Are you putting people, planet and profit at the same level?

Human beings are extremely creative and resilient, especially when they are operating within an institutional framework that encourages and supports their actions.

Each of us has much more hidden inside us than we have had a chance to explore. Unless we create an environment that enables us to discover the limits of our potential, we will never know what we have inside of us.

If we can imagine something, there is a good chance that it will happen. If we don’t imagine it, there is almost no chance of it happening. (From A World of Three Zeros: The New Economics of Zero Poverty, Zero Unemployment, and Zero Net Carbon Emissions.) 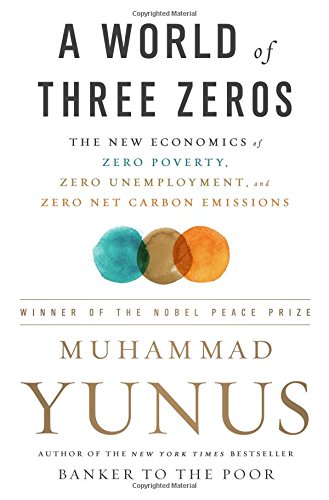 To me, the poor are like Bonsai trees. When you plant the best seed of the tallest tree in a six-inch deep flower pot, you get a perfect replica of the tallest tree, but it is only inches tall. There is nothing wrong with the seed you planted; only the soil-base you provided was inadequate. Poor people are bonsai people. There is nothing wrong with their seeds. Only society never gave them a base to grow on.

(From Creating a World Without Poverty: Social Business and the Future of Capitalism)

I try to kind of enlightened my frustration and agony by coming to the conclusion that I may not be useful as an economist but I m still a basic human being.

My greatest challenge has been to change the mindset of people. Mindsets play strange tricks on us. We see things the way our minds have instructed our eyes to see.

Capitalism has been interpreted as an exclusively profit-centric human engagement. Some have been saying to bring people and planet into the picture. This can be a good change, but it is still not fully operationalized. Are you putting people, planet and profit at the same level? Can Kindness Make You a Better Boss?